I came to Jordan 11 years ago and I had no relationships here at all… MFW supported and motivated me to develop and start new projects.

Microfund for Women (MFW) won the Mahatma Award to recognize its humanitarian role and social impact in its initiative to take a series of actions towards its beneficiaries to cope with the aftermath of the Corona pandemic.

In a statement on Sunday, MFW stated that this award, named after Mahatma Gandhi, a prominent politician and spiritual leader of India, is awarded to socially influential leaders and institutions who work for a sustainable future in honor and recognition their roles in bringing about positive change in societies.

Moreover, MFW brought the attention to that it was the only Jordanian institution that had won the award this year, being a world-class non-profit company that provided support to women in Jordan, in recognition of its efforts during the Corona pandemic, believing in great responsibility for society and women beneficiaries, and recognizing the difficult economic situation.

MFW also had crowned the interest and relief of its beneficiaries at the top of its priorities and procedures, which was forefront by postponing all beneficiaries’ payments for March and April of last year without charging any additional fees.

It is worth mentioning that MFW had also provided financial solutions for many beneficiaries to overcome part of the consequences of the crisis, such as the possibility of continuing to postpone payments, scheduling funds, flexible renewal, and emergency funding.

MFW launched an online campaign called “Tamnona,” during which it conducted an online survey of some 145,000 beneficiaries, including a series of inquiries, the health status of the beneficiaries and their families, and their nutritional needs, particularly in times of total prohibition. As a result of its campaign, MFW distributed 1,400 food parcels to underprivileged families.

MFW asserted that they lead in translating the principle of digital transformation and harnessing the technology in many services and procedures, like launching an online smartphone app that allows the users to access financial details regarding MFW’s financial and non-financial services.

MFW also pointed out that it had implemented several free and specialized e-training programs during the pandemic lockdown period in the areas of leadership, start-up, and project management, and had made it possible to participate in the “Tebi” application, which offered medical consultations through direct contact with doctors, which lead to a noticeable investment by many women beneficiaries, particularly during the lockdown.

For her part, Microfund for Women’s Director-General Muna Sukhtian said that “winning the award is a positive motivation for continuing to stand behind every ambitious woman, especially in difficult economic conditions, and that our main inspiration remains as our positive impact on the lives and success stories of our beneficiaries, which we live daily.”

MFW’s role in the economic and social empowerment of women was not limited to the provision of financial services, but also to many non-financial and community services aimed at protecting beneficiaries and their families, developing their professional and managerial skills, and providing supportive support such as training, development, marketing, and others.

Since its establishment by Amed Skadeva, a known member of India’s Community Institutional who believes in strengthening Mahatma Gandhi’s ideas, the Award has been awarded to 250 people, and institutions worldwide contributed to the positive impact on their communities.

In its statement, MFW stated that it had won the award, among many social institutions such as Save the Child, Taawon (Welfare Association) Palestine, Habitat For Humanity, and the charitable sub-companies of many global companies such as Twitter, Google, and Microsoft. 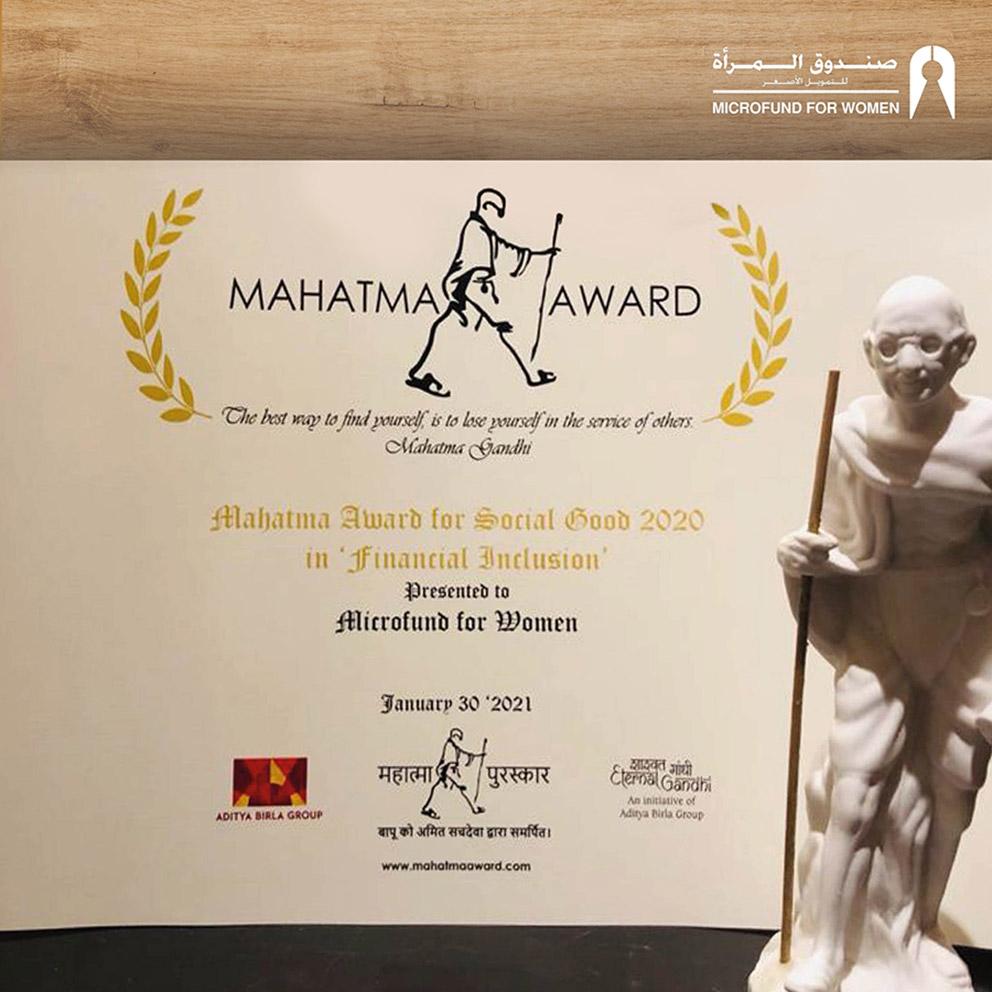